Sentry is a entirely open source platform founded in 2010 by David Cramer and Chris Jennings. It provides real-time crash reporting that gives teams insight into errors affecting their customers in production. The company has recently raised $9 Million in Series A funding led by NEA. Below is our interview with David Cramer, Founder and CEO at Sentry:

Q: David, tell us how the idea to create Sentry was born? What is your startup story?

A: I used to hang out in an IRC channel dedicated to users of the Django, a web framework written in Python. Often the conversation in the channel was people asking questions, and one such question was how one might take errors that they hit in their application and aggregate them into a dashboard. I quickly whipped up an example to help the user (roughly 70 lines of code), put it on Google Code, and that was that.

Fast forward a few years, I join Disqus and discover they’re using that same code. It was a little mind boggling to me that a company with as much traffic as Disqus as able to just drop-in the simple code I wrote and find a lot of value out of it. That said, it had its warts. So within the first couple of months after joining Disqus we decided to rebuild the project into the first real version of Sentry.

Chris — my cofounder — and I were at Disqus for roughly three years, and towards the end of it we decided to build a small cloud offering around Sentry. At that point we had most of the Django community using Sentry, and the need had come up several times. Over Christmas break in 2012 we built the initial hosted offering for Sentry.

For the next couple of years Chris and I were still employed by other companies. I had left Disqus to join Dropbox, and Chris went to GitHub. In our spare time we slowly built up the Sentry business and expanded on the product. Eventually it got to be such a large commitment that we decided that we had to make a decision: quit our jobs and do Sentry full-time, or lose all of the time we had invested.

In January of 2015 we had made the decision to build Sentry into something real. The next few months we spent fundraising and hiring the initial team. Fast forward to today: we’ve raised a little over $10m in venture capital and grown the extremely talented team to 15. 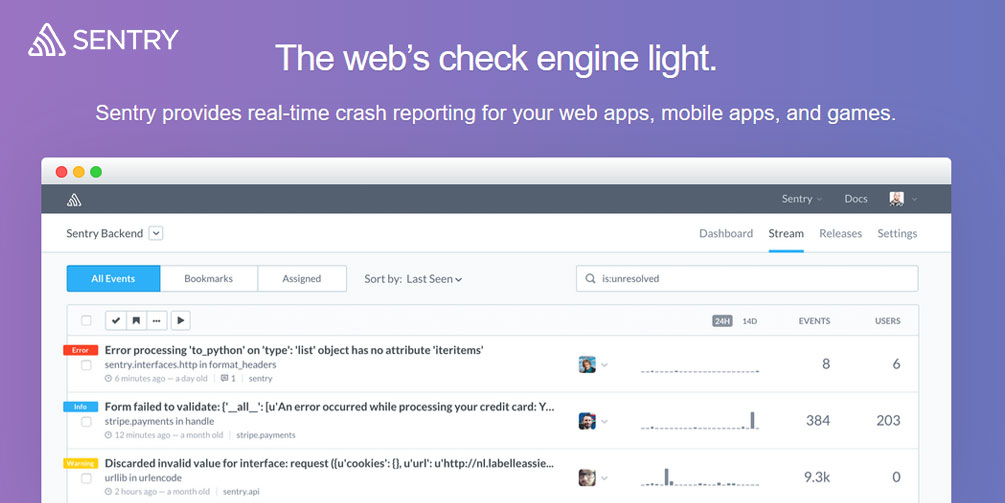 Q: Could you please give us more insights into Sentry´s functionality?

A: Sentry’s core is an event aggregation engine. It provides a lot of abstract infrastructure to process large structured JSON blobs in real-time, materializing the aggregated results into a dashboard. The historical focus of this has always been on error reporting. We got our start with web errors (for example, whenever you see a “Internal Server Error” page), but recently have been moving more towards client-side browser JavaScript as well as mobile platforms.

At the end of the day, Sentry provides a system which intends to tell you when something goes wrong, and gives you all of the details so you’re able to come to a resolution without any of the traditional back and forth of customer support.

Q: What makes Sentry unique in the market?

A: First and foremost, we’re entirely open source. We’ve entered the era where this is super important. People no longer run proprietary infrastructure services, and the open source aspect of Sentry has allowed access to many organizations which otherwise might have rolled their own similar products.

Secondly, we’re an engineering first product and company. This is subtle but extremely impactful. We’re building an enterprise product, but we’re not an enterprise company. Our entire focus on how to make the lives of product teams better, and we take a careful approach to that. We build features that enrich experiences rather than trying to trick you into using a product which doesn’t provide value. Our entire growth model has been self-serve and organic, which I believe is extremely telling of how much value teams get out of Sentry.

Q: You’ve recently announced a $9 million series A funding round; what are your plans?

A: To keep pushing the boundaries. We’re a pretty immature organization yet. The team is entirely product engineering — there’s no sales, marketing, or even customer support. We’ve got a long ways to go to build the business we want, and part of that is growing the organization beyond engineering.

Additionally there’s a lot of very complex technical challenges ahead of us. We’re trying to do something fairly technical across every language and platform, and we’re trying to do it at a scale that’s unheard of. We capture an enormous amount of data from many of the biggest technology companies, on platforms where once this technology never existed (like in the browser).

Q: What’s the best thing about Sentry that people might not know about?

A: We haven’t done a great job of educating people on some of the amazing functionality within Sentry. I’m personally extremely excited about how the User Feedback concept is shaping up — a modern take on crash dialogs built for the web. There’s also a lot of power in Sentry exposed by passing some simple additional context in the form of tags, which allow you to drill down into how your issues are impacting various segments of customers. For example, you could automatically tag all errors which are affected paid accounts.