T-Me Studios recently presented its new app – Redraw Keyboard, a sturdy, fun, ads-free Android keyboard that can both look top-notch and improve its users’ productivity. With over 1 Million installs so far, the company has just flown past its #1M1M goal – 1 Million users in 1 month, 10 days ahead of schedule. Below is our interview with Ioanina Pavel, Chief Content Officer at T-Me Studios: 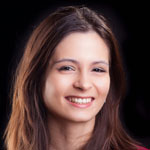 Q: How did T-Me Studios start?

A: It all started once upon a time, almost 3 years ago, in a – wouldn’t you know it – Starbucks café where Matei and Laurentiu, two entrepreneurs in their early twenties, decided to take a leap of faith and hitch their future to the Android OS. It’s these three years of growing and mastering the ins and outs of the mobile app-scape that now make our latest product, Redraw Keyboard, a sure thing.

But back then, it was all a gamble and a dream. Start a firm together. What’s the worst that can happen? It was a risk Matt and Lawrence undertook with a shoestring capital, but T-Me Studios soon took off in the personalization apps’ ecosystem and left that rock-bottom scenario, all too common for app developers, in its rear view. Over the years T-Me Studios has grown by leaps and bounds and now boasts over 6,000 of the personalization apps published on Google Play and hundreds of thousands of users worldwide.

What’s more, through some smart market watching, always timely, on-trend moves and swift tactical pivoting, the two co-founders have assembled a 50+-strong team of developers and graphic designers, a well-oiled machine that makes us quicker on the draw than our competitors. The skunkworks division most notably has been running experiments on the keyboard skins we produce for a while now – and Redraw Keyboard, our standalone theme- and emoji-packed keyboard is as much a product of their results as of Lawrence’s canny nose for spotting the new “It” app types on Android.

On the back of this big new leap we’re taking, a couple of strong partnerships and a few other secret projects we’ll be pushing out when the time is right, we’re now actually in the midst of moving HQs for the third time – the charm! We’re trading up to a whopping 800 sqm primo space in the tech hub of Bucharest, Romania – our home base, a great-looking tech-blooded city in South-Eastern Europe that we encourage everyone to come visit.

A: With Redraw Keyboard we set our sights on ruling the personalization apps category on Play, by creating a sturdy, fun, ads-free keyboard that can both look top-notch and improve our users’ productivity.

After making and publishing over six thousand apps on Google Play, you’d have guessed already that a big part of what makes Redraw Keyboard live up to the hype is its impressive collection of keyboard skins. Our in-house team of artists has made hundreds of quality themes available within Redraw Keyboard – so users won’t have to fumble around with third-party themes. Also baked into Redraw Keyboard are emoji and sticker packs, as well as wallpapers, all designed in-house.

Aside from the sizzling-hot preset looks users can choose from for their keyboard, they can also make their own as we’ve built a theme-maker studio right into the keyboard! They can choose the colors, sounds and fonts for the keys or apply their own photos on the background – the sky’s the limit here!

In an everything-but-the-kitchen-sink move, Redraw Keyboard lets users access their Google Docs straight form the keyboard, it has an instant translation feature that plays well with any language and alphabet out there, and gesture typing (swipe) for ease of use. All of this without slowing down the app or blundering the core features of a keyboard app in any way.

Last but not least, we’ve gamified the very idea of the keyboard app by including a leader-board, where users all over the world can rank based on the actions they take within the keyboard. The more they type and the better they get at unlocking the challenges thrown at them by the Redraw Keyboard game mechanisms, the more rewards (coins) the users can get, that they can then use in the app.

Q: What geographic markets are you focusing on currently?

A: We launched Redraw Keyboard on Google Play on September 7 and we’ve been pushing to get 1 million downloads in 1 month – we called it the #1M1M challenge. We were so happy to see that on Wednesday, September 28, we hit the 1 million mark – with ten days to spare. It seems we’re doing something right! About 10% of our users are US-based and that’s a market we’re focused on getting more of a foothold in right now. Elsewhere, Redraw Keyboard has proven quite the success with Android users in Mexico, Brazil, Argentina and India.

Q: What kind of feedback are you getting from users?

A: We’ve been getting a lot of great reviews for Redraw Keyboard on the Google Play page, totaling to just under 15,000 and averaging a 4,5 out of 5 stars in all. Most of our users are responding really well to the large array of different-style themes and to the customization option via the built-in theme maker. A good number of them are also talking up the achievements mechanism and the all-round dependability of Redraw Keyboard – they have our dev and QA team to thank, if bug quashing were an art, they’d definitely be getting a star on that Walk of Fame. We’ve also been fielding requests for even more baked-in goodies, so we’ve just released an update with some in-demand new features, like emoji prediction and multiple keyboard layouts, and a new batch of themes for good measure.

A: Our plans for Redraw Keyboard are to keep fine-tuning it and packing it full of the features that work best for casual and pro users alike. It’s already the top new app in the Personalization category and the 6th best in the all-round US rankings and we’re just three weeks old. We have a big game-changer of a feature in the wings right now that might just take us to the top of the app store – but I’m sworn to secrecy for now, you’ll just have to download the app and keep an eye out for that one! T-Me Studios is also gearing up to launch a couple of new mobile apps, that will see us dipping a toe in the iOS ecosystem as well – we’re eager to see how this all pans out!