We caught up with Superstar Josie Ho: 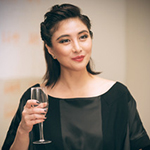 Q: Josie Ho How did you end up getting a role in the new Roger Avary movie “Lucky Day”? Was it a regular audition or did you meet somewhere and do an off the cuff audition? We never know how some of these things happen.

A: My old manager asked me if I want to play a cameo for Roger Avary which was five days before the gig was supposed to start. I totally jumped on this idea, I didn’t know why Roger wanted me in the role until I met him. He told me he loved how I acted in my film “Dream Home”.

Q:What are your favourite types of films to be in? Is your preference changing as you gain experience?

A: I have always liked doing cult, fantastical, indie, art and period pieces. I never really set my sights on blockbusters.

Q:What are your qualities you like showcasing in different roles you play? Anger? Happiness? Or what effect do you like to have on an audience using a role you play?

A: This is a hard question. I think my uniqueness comes from the fact that I’m a mixed Chinese person. Not fully Chinese. My ancestors are Dutch, Persia, German and Jewish and my mom’s side is fully Chinese. I guess I have really interesting features and really full eyebrows! I like when my fans don’t recognize me playing a role at first because of the different accents or foreign language role I play. I like being a chameleon. I love it when at the end of a film they go “wow, that was Josie!”.

Q:What are you working on these days, do you have a follow up film you can tell us about?

A: Things for me are feeling so good these days. There’s a momentum that’s keeping me os busy. My documentary “Finding Bliss” came out right before Lucky Day hit the big screen. Roger Avary’s “Lucky Day” is finally out. Roger asked me to try a funny accent. I got such a kick out of it because I got to play a really funny character named Mrs. Kok. I made Roger and the crew crack up. What else could I ask for?

My new film “Rajah” is starting to film now. It’s an epic script. I’m honoured to work with Malaysian natives and Johnathan Rhys Meyers and Dominique Monaghan plus Director Michael Haussman and Producer Rob Allyn. I think this will be such a cool experience in the jungles.

Q:Do you ever work with your celebrity husband? What marriage advice do you have for anyone wondering how to make a marriage last beyond five years.

A: We’re old fashion and sort of romantic as a couple. We think marriage should be infinite. If I had never met my husband, I would have probably stayed single! He also doesn’t want to work with me because he’s the shy one.

Q:What is your favourite American destination, city wise and food to eat while there…

A: It’s hard to say because I haven’t been to every single state yet. I love L.A the most because the food is healthy, everyone is healthy in L.A. Maybe it’s because everyone there is an Actor, this just helps. I also really love New York but it’s further away for me to visit as often. Nashville also really has my curiosity because their music scene is booming. Colorado too. Wait, I think there’s more. Can I let you know when I visit more states? Hahaha. Just kidding.

Q:What celebrity in Hollywood would you most want to be in a movie with if you could pick anyone to act with?

A: Oh That! That’s hard to tell you. I’m a fan of Johnny Depp, Tilda Swindon, Julianne Moore. They inspire me so much.

Q:Do you have any persona projects you want to share with us?

A: I’m curating a photo exhibition tour with Patti Boyd in Hong Kong and Beijing to start with. We might take this on the road though because when people see how cool this is, we might just get that phone call that asks us to bring it somewhere new. This collection has some very cool situation and encompasses pictures of 60’s, 70’s Rockstars. I’m sure it’s going to be pretty cool.