Incent is one of the first universal, merchant-backed loyalty platforms. Incent is both a cryptographic token and a loyalty eco-system, which allows merchant clients to incentivize custom by rewarding their customers, at the point of transaction, which has the unique property of being convertible on the Waves blockchain. Below is our interview with Rob Wilson, CEO of Incent:

Q: Where did the concept of Incent begin?

Our mission has always been to pursue mainstream adoption of cryptocurrencies through commerce. We launched BitScan in the beginning of 2014 and it has grown to become pretty much the biggest bitcoin merchant directory out there. Initially we were just promoting the merchant adoption of bitcoin but last year I had a eureka moment when I looked into my wife’s wallet one day and saw a host of plastic loyalty cards stuffed into it. She had no idea how much value they contained or remember when she had last used any of them. Some research confirmed my wife was representative of a larger picture: the average US household is a member of over 20 loyalty schemes but less that a third of them are active. Conventional Loyalty schemes were failing badly and here was an opportunity to get cryptocurrency into the hands of regular people without them needing any knowledge of cryptocurrencies.

Q: Incent aims to bring loyalty rewards to the blockchain. What makes Incent unique and what is the company’s long term potential?

Incent is about doing loyalty better – more effectively, not just more efficiently. We didn’t want just to move existing points-based loyalty schemes onto the blockchain, we felt that such a use-case missed the biggest opportunity that blockchain presents. The technology has so many compelling features that we could leverage – so we’ve redesigned the concept of loyalty to utilise these qualities, turning it into something that is both technically and economically superior.

Whilst blockchain is fundamental to the whole undertaking, it’s not visible to the end user or to the merchant. It runs under the hood, powering the Incent system but not intruding into the customer experience. The customer receives the rewards straight to their phone into a ready made digital wallet and by downloading the Incent App they can keep track of their Incent and its real-world monetary value. For the merchant, there are big cross-selling opportunities that come with being part of a network, rather than struggling along using their own token within the ‘walled garden’ of their own business. We believe this open commerce model is far superior to the received wisdom of the loyalty sector. The blockchain allows not just a technically different, but an economically different approach – and it’s really powerful.

Q: Could you explain how Incent works economically?

Consider traditional loyalty schemes. For every point issued the merchant has the liability that one day the customer may return to redeem it, hitting their bottom line. Crazily, the merchant survives on the fact that most customers will not redeem their points because such an event would bankrupt them. So schemes are designed to discourage excess loyalty! Points frequently time-out or are issued on paper or plastic cards that (hopefully) people will lose; merchants require a part-purchase of something the customer doesn’t want, or require a newsletter sign-up or some other hurdle to redeem them. Blockchain provides a way to escape this defeatist scenario by allowing loyalty points to exist independently of the merchant. Incent delivers a rewards solution to the merchant at way less cost and without the forward liability legacy schemes.

The originating business doesn’t issue Incent like a central bank issues fiat money, printing it at will. They buy it off the open market, from a fixed supply that will be created after our crowdfund ends. It’s a little bit like being rewarded with gold – it’s the same market dynamics. Retailers can offer it in any proportion to suit their margins, as a bonus with certain purchases or in return for goods and services. In fact, whilst they can’t create it themselves, they can pretty much configure its issuance any way they want in terms of their own business. As more merchants join the Incent network, demand should create scarcity driving the price up.

People get stuck on the idea because the existing loyalty model is so broken. So look at it this way: Incent is a kind of smart, configurable cashback. It has real value. It will rise in value as time goes on. You can cash it out or trade it on an exchange. Or you can spend it directly at any store that accepts Incent. Isn’t that the kind of reward you’d want more of? Wouldn’t you return to a store that offers that? And for merchants, why wouldn’t you return a little of each transaction – perhaps 1%, perhaps 10% depending on your margins – to customers on the grounds that they’d do so, and that you’d have access to money issued elsewhere in the Incent system?! Rewards become genuinely rewarding and that’s what’s currently missing from the rewards sector. And, of course, investors who hold for the medium- to long-term will definitely see the benefits of all this. 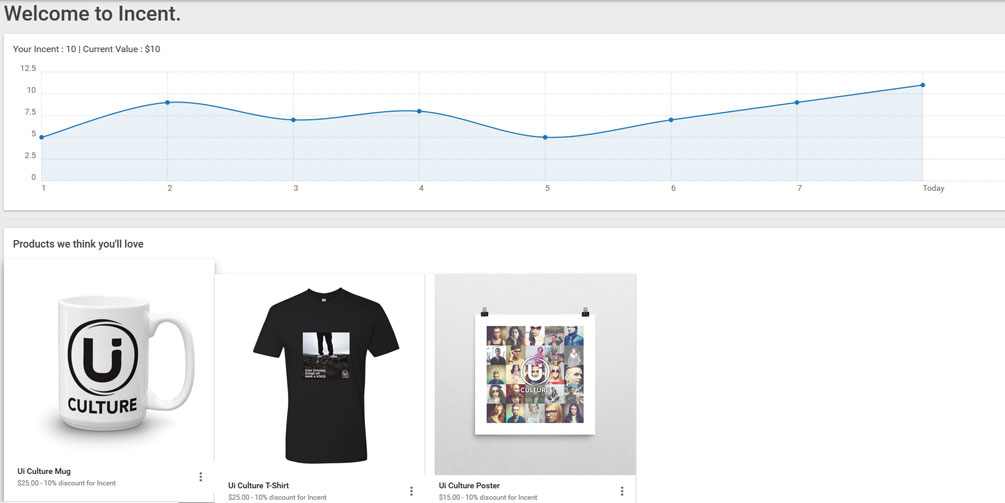 Incent is crowdfunding via an ICO until 30th November. The aim of the ICO is to raise money to integrate our (existing) proof-of-concept wallet with merchants and we have been humbled by the encouragement of the bitcoin and blockchain community. We’ve raised over 1,000 Bitcoins in the first week, enough to launch the product early next year. Every week the cost of the Incent tokens goes up so early investment is rewarded. Our target is $1 million with a cap of $5 million, to ensure a healthy secondary market.

We are now growing our network of merchants who wish to be part of the Incent rewards program. During the opening days of the crowdfund two businesses came on board. The first is a bricks-and-mortar establishment: the Temperance Society bar in Sydney, where BitScan is based. The second is Sure Green – a UK-based landscaping wholesaler and Incent’s first e-commerce client. What’s great about these two, apart from the fact that they represent such different sectors, is that they see value in Incent for different reasons. As an e-commerce trader, Sure Green sells through Amazon and eBay, but is hit with a high commission fee. Their CEO is happy to pay that in loyalty points to get people to shop through his own site. The Temperance Society bar, meanwhile, is a local business and social hub, and sees huge value in fostering that vibrant local economy. Shortly afterwards, we were able to announce the addition of two more businesses located in Australia; the furniture retailer Cofint, based in the Northern Territories, and Software company Practice Manager 24/7, operating out of New South Wales.