Vound is addictive new app that allows you to create soundbites (jokes, quotes, sound effects) up to 11 seconds, combine them with a photo and share with friends. Below is our interview with Ioanna Angelidaki, from Vound team:

Q: Ioanna, tell us what is Vound?

A: Vound is all about audio creativity; we want to introduce a new kind of short audio expression that doesn’t extend beyond 11 seconds. Users can record themselves, combine their voice with famous quotes, sound effects or anything they can imagine in a simple and fun way and share with their followers. Ever wanted to have a conversation with Gandalf? Here is your chance!

Vound is currently available on the App Store for free and soon will be released on Android.

Q: What was your inspiration for making it?

A: The idea of Vound came as a combination of an emotional need and market research. We realized that users are increasingly voice engaged – they find it natural to speak to their devices, let it be Siri, Cortana or Google Voice. At the same time, our Facebook and Twitter pages shine through the absence of the voices and sounds that impact our lives. That’s why we created Vound, to give our voice the attention it deserves online, to make Social Media more personal and unleash a new kind of creative expression.

Personally, if I had Vound a few years back, I would have saved my grandmother’s voice, andtreasure her memory just as I do with her pictures. 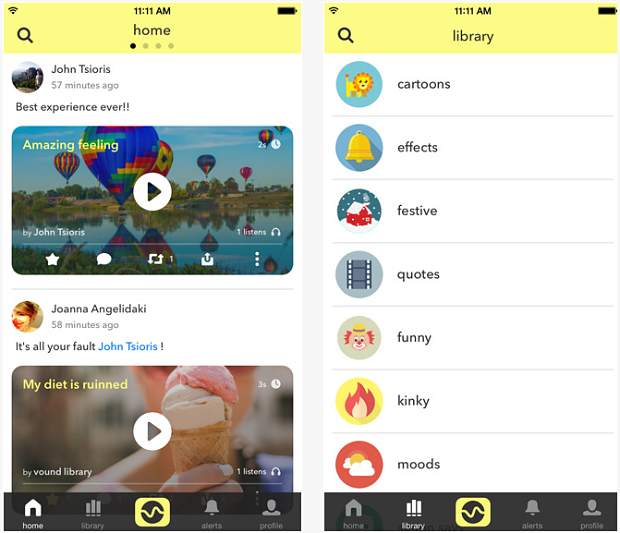 Q: How long did it take to put together Vound? How big is your team at the moment?

A: On January 2014, Vound was still an idea between me and John (CEO). It took us a few months to define the product, map competition, create a team and raise initial funding. In May, we were ready to develop. From the early days we got valuable support and guidance from our Venture Advisor, Shadi. Our developers, Pantelis and Nikos worked closely with our designer, Dennis, to make Vound a top tier application; our Growth hacker, Cosmin, joined the team bringing in needed marketing skills. Finally 11 months later despite the challenges and the steep learning curve, Vound launched and an amazing journey started!

Q: What’s your revenue model? How are you funded?

A: We are currently not monetizing, but we are planning to integrate some freemium features and paid extensions in the application to sustain it. We are happy to have received support from angel investors who believed Vound will be the next big thing.

Related: AppYourCar – Gives You An Easy And Safe Way To Use Your Phone In Your Car

Q: What can Vound users expect in 2015, and what’s your favorite upcoming feature?

A: For 2015, an Android version of Vound is to be anticipated. Localizing the application for major languages is also on the roadmap. In terms of new features, we are working on an impressive integration that will make Vound more interactive and fun to use and skyrocket user’s creative potential!

Looking towards the future, we want Vound to be the world’s biggest creative audio network.